How an Australian business is ensuring a safer boarding experience for rail passengers.

The people at Sydney Trains knew they had a problem. According to their own figures, on average five people fell through the gap between train and platform every week across the Sydney train network. The majority of those were children or elderly commuters. Some 13 per cent of these falls occurred at Circular Quay Station, one of the network’s busiest terminals.

“While there’s a long way to go, we are confident this technology may be a solution to improving safety and accessibility on some of our problem platforms.”

“We took our existing product and modified the design to suit the particular requirements,” he said.

“We also worked with Sydney Trains on the installation methodology that was largely completed by the Sydney Trains’ team.”

The Platform Gap Filler was installed on Platform 1 at Circular Quay in December 2020, with Platform 2 completed in mid-February. Since the trial began, there have been no reported incidents due to the platform gap.

The Sydney Trains team undertook the painstaking process of installing the Platform Gap Filler along the entire length of the Circular Quay platforms that involved drilling more than 1,000 holes into the side of the platform.

Platform Gap Filler is described as “a sturdy, hard-wearing rubber element that is mounted along the edge of a platform to reduce the gap between the platform and the entrance of a passenger train; ensuring that when a train stops at a platform, passengers can enter and exit with safety”.

“The fingers are designed to move aside with heavy horizontal loads such as a train brushing against them. But vertically they are quite strong, and a person can stand on it and be fully supported,” he said.

“They are also ideal for passengers who require wheelchairs and scooters for mobility. The gap filler is so sturdy that it can support the mobility-impaired.”

The Delkor Rail Platform Gap Filler is available in several sizes, colours, mounting applications, and material specifications, so it can be designed to suit most platform and operating conditions. 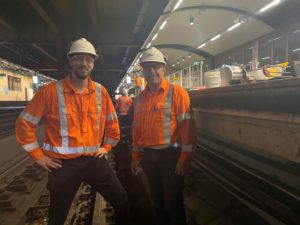 Delkor Rail has worked with many large railway operators to design and supply Platform Gap Filler’s on station platforms across Europe, South East Asia and North America. In Australia, Delkor Rail has designed and manufactured platform gap fillers in both Melbourne and Brisbane metro train networks.

“The Platform Gap Fillers (PGFs) are designed to suit the operating and gap profile for each particular network,” Stamboulis said.

“The PGFs supplied in Melbourne Brisbane and Sydney are different but based on the same design principle.”

The business also has installations in the UK at the Heathrow Airport tube stations, in The Netherlands, Dubai, Hong Kong, Korea, US (at bus stations) and Toronto in Canada.

So, what is the future of this product?

“With passenger safety becoming a priority then the future use of the PGF’s is quite high potential,” Stamboulis said.

“The words ‘Mind the Gap’ can be seen and heard at virtually every major metro around the world.”

The PGFs are designed in Sydney and manufactured at Delkor’s mass production plant in Melbourne’s south-east. The same facility mass produces suspension components for the latest generation rollingstock.

Stamboulis talked about the evolution of the product.

“There was an opportunity many years ago to have a solution to address the gap between a standing train and the platform,” he said.

“This is an issue within most metro’s globally. Train travel has proven to be an efficient means of transporting a high capacity of people in major cities around the globe,” he said.

“The PGF adds a factor of safety for passengers preventing falls and injuries.”

Hopes for the future

“Our long-term goal with the PGFs is to see it utilised in situations where the gap between the train and platform is large enough to potentially cause injury and delays in the busy rail metro systems around the world,” Stamboulis concluded.