With more eyes and ears on the rail corridor than ever, limiting noise disruption is becoming more important.

While the shape of most large cities is defined by the car, in some, rail plays a dominant role in how the city functions. A prime example of this is Chicago. Since the arrival of rail in the mid 19th century, the city has been the central hub of the US rail system, with more kilometres of rail radiating out of Chicago than any other US city.

Today, the city is still crisscrossed by rail lines, and the elevated track through the centre of the city, known as the “L”, has come to define Chicago’s streetscapes.

Just like other cities around the world, in early 2020, Chicago’s professional class was sent home to work and avoid COVID-19. As cases picked up from February and March, many residents were reminded of the rail lines that run beside tower blocks of their apartments, and not always in the most pleasant way, said Vennie Dyavanapalli, director friction management at Loram.

“A lot of the professional folks that were living and now working in that area started noticing the unpleasant noise coming around that curve.” 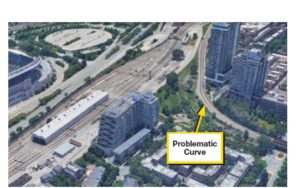 The particular curve, and focus of this study, that Dyavanapalli refers to is a heavily used combination freight and passenger route located in a dense, downtown area of Chicago. Operated by a Class 1 railroad, residences complained about the noise from train traffic that they were hearing from being at home all day. 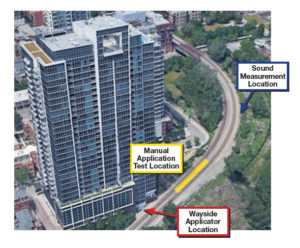 “That curve has been there since before these high-rise towers were built” said Dyavanapalli.

“There’s a lot of people working remotely in the cities now and that’s what caused this. It wasn’t that the railroad wasn’t there before or that this problem didn’t exist before. This problem wasn’t a priority because people weren’t working from home.”

The noise levels were reaching over 100 decibels. Loram was brought in by the railroad to look at how to reduce the noise coming from the track. Having had 25 years of experience in friction management, Dyavanapalli knew that a friction management, specifically a top of rail solution, would be required.

“The only viable possibility that was readily available was to create some type of lubrication plan. We knew from successful experience that putting in top-of-rail would significantly reduce the noise levels,” he said.

In other instances, straightening the track could reduce the noise from the curve, however in this already densely populated area, any solution had to work with the existing rail alignment. To validate the effectiveness of the top of rail solution, Dyavanapalli’s team tested the technology.

“We did some initial handheld studies – such as spraying the curve with a Loram modifier – to see whether it would reduce the noise. For a few weeks we measured the noise levels in a baseline or dry condition and then in a lubricated or what I would call a friction modified condition.”

After testing, Loram found that the application of its top of rail friction modifier cut the decibel level by 13.5 per cent and events over 90 decibels were cut by 72.5 per cent when applied manually. These noise reductions were achieved while preventing wheel slip.

“If you’re watching a train go by and you hear a high squeal or a high-pitched noise, that’s the slip that’s happening between the wheel and the rail,” explained Dyavanapalli.

When a train negotiates a curve in the track, the wheel on the outside must travel further than the wheel on the inside to cover the greater distance in the curve’s diameter. Train wheels are conically shaped to account for this. As the wheel moves from the smaller to the larger diameter point, known as slipping, under high friction that causes the squealing noise.

“When the train is negotiating that curve, and a small amount of friction modifier material is put down, that material will absorb that slip and the energy that it’s causing, thus taking away the noise,” said Dyavanapalli.

Seeing that this would be an effective solution, Loram tested a Loram friction modifier’s automated application via a Loram wayside applicator known as TracShield. When two freight trains passed through, only four and six events over 90dB occurred, compared to 46 and 63 events during the dry tests.

What made this particularly effective, said Dyavanapalli, was knowing exactly where the friction modifier was needed and how much had to be applied to have the biggest impact.

“What is unique with what we do, is our understanding of how much material and where to put it down. We fundamentally feel that the equipment and the consumable should not be independent of each other, but rather somehow married to each other and that’s what we were able to bring to the table,” said Dyavanapalli.

As Dyavanapalli explained, the middle of the curve is where the greatest amount of lateral force is applied as the train negotiates the curve. Knowing this, Loram was able to apply the right amount of friction modifier to mitigate the lateral force that was causing the noise.

“With our equipment design, we were able to put an application point just ahead of the curve, where the primary traffic would roll through. We saw a 10dB reduction.”

Another factor in using friction modifiers to reduce wheel squeal is that applying too much will impact braking performance, so the team had to be careful about only applying the right amount.

“We have a pumping system that’s metered where we have developed extreme resolution on the amount. We didn’t want a lot of carry down, we wanted the product to be very localised to that specific site. After observing the site, working with the local railroad personnel, knowing what the wheel counts per day look like, understanding the traffic flow primarily at a certain point in the morning or afternoon when the trains are clustered or in a gap, we were able to calibrate the output.”

The technology was able to target a point of the wheel-rail interface no larger than a five-cent coin where the most slippage was occurring.

Since applying the solution, Dyavanapalli and Loram have been in discussions with the track owner and feedback has been positive from residents and others in the area.

“The best feedback is that I didn’t get a callback, except for please return and fill the TracShield,” said Dyavanapalli. “We did not get any other calls. If the residents were still complaining the railroads would have called back.”

Another kind of stakeholder would have also benefited, said Dyavanapalli.

“There is a dog park next to the curve, the dogs didn’t like that high pitched squeal as well and as a result their reactions/behaviour improved.”