Martinus Rail has won the contract for rail supply, track, and overhead wiring for the City Rail Link in Auckland, New Zealand. END_OF_DOCUMENT_TOKEN_TO_BE_REPLACED

In the 2020-2021 budget unveiled by federal Treasurer Josh Frydenburg, the total infrastructure pipeline for the next 10 years grew to $110 billion, with a $14 billion increase this year. END_OF_DOCUMENT_TOKEN_TO_BE_REPLACED Having stepped up from a product supply business into a rail construction outfit, the young upstart of the Australian rail construction industry decided three years ago to head out on its own with the purchase of major multi-million-dollar pieces of machinery.

“The business has only been delivering construction projects for around eight years,” said Martinus chief operating officer Ryan Baden. “For the first part of five years, we would be relying on other people’s plant and equipment to do the final piece, mainly tampers, regulators, and flash butt welders. We had grown to a position where it was only the large, tier one contractors that had these pieces of equipment and we were now competing with them.”

To de-risk construction projects it was working on, Martinus made the decision to purchase the plant, machinery, and equipment and recruit their own team to overhaul and maintain the growing fleet.

“It’s essentially about de-risking project delivery and overall business risk ,” said Baden. “We control all the pieces of the puzzle; we recruit all of our own labourers, engineers, and supervisors, plus our strong financial position and current project pipeline means we can significantly invest in our own plant and machinery.

“Our next goal was to purchase our own ballast trains – that has really changed everything for us, it solidified our end vision of having the largest fleet of specialised rail equipment in Australia, all the while ensuring we were well equipped to deliver upcoming projects and maintain full control of logistics and maintenance.”

For any major rail construction project, having a few pieces of bright yellow kit is not enough by itself, there needs to be a level of logistical and rail safety knowhow to ensure that the kit is fully operational, at the right place, and at the right time.

“In the past, particularly for the product supply side of the business, we were using freight forwarders and received good service, but the plan for some time has been to bring it all inhouse.”

As the fleet grew, so did the team. Martinus hired logistics manager Jason Gibson who has previously worked for a large mining company. The vertical integration of Martinus’ supply chain has worked before and is now even more enhanced by their inhouse experts.

The value of these investments was realised straightaway, said David Van Hoos, national plant and asset manager for Martinus.

“The first tamper we secured was mobilised as part of the Gold Coast light rail project Stage 2. We were able to quickly bring it up to site specification and employ our own operators and fitters, we gained flexibility to adapt to program changes and minimise any potential interruptions or delays that may have occurred relying on external suppliers.”

With the successful implementation of the first piece of major plant and several large- scale projects in the pipeline, it made good business sense to create a standalone plant department dedicated to servicing their own rail projects. This has also increased Martinus’ capacity and capability to become a consistent and reliable interface on major rail and civil construction projects.

“What we’ve found is clients are looking to de-risk themselves around interfaces on sites,” said Baden. “In the past, clients would bring us in to deliver the track, someone else to complete the overhead wiring, and another contractor for signalling – that’s three different interfaces for them to manage. With extensive rail knowledge and strong project management skills, the next step to further add value for our clients was bringing in subject matter experts to handle the overhead wiring, signalling and comms as part of the Martinus team.”

THE DEVELOPMENT OF A RAIL-DEDICATED PLANT DEPARTMENT
Having established the plant department, the team under Van Hoos’ leadership has grown to include a maintenance team of 15 fitters, project managers, engineers and support staff.

“Our fitters are key to the success of the plant department, we’ve selected them based on their industry experience, but to build on that experience we’ve also recruited electrical and mechanical apprentices to build a diverse and well-rounded team for the future,” said Van Hoos. “It’s great to be able to invest in the younger generation and teach them everything we know about rail.”

Rather than swelling in size for each individual project, the team at Martinus are employed full-time to ensure that the business can deliver on any of the major projects it is engaged on. Being solely focused on rail has contributed to the energy and enthusiasm in the workshop, said Van Hoos.

Supplementing the skilled tradespeople are local suppliers, when needed. Currently, Martinus is constructing the Carmichael Rail Network (CRN), in Central Queensland, and has just engaged a local Mackay business in a $1 million contract to fabricate the metal framework for the supply consist behind Martinus’ tracklaying machine. Staying in touch with locals has also come in handy as border restrictions have limited the movement of people across Australia and New Zealand. Martinus have engaged Harsco to build two continuous track lifters (CTL), who are local to Martinus’ main plant department in Brisbane. The CTLs are being fabricated and manufactured locally.

“The border restrictions have also forced us to look outside of the rail industry to build our team,” said Van Hoos. “We have employed members from the military, electricians from the automotive industry, and fitters from the mining sector all led by experienced industry leaders – this diverse mix adds another level of knowledge and bring a unique set of skills to our team.”

“With travel restrictions in place, it’s been a great advantage to have Harsco close by as we’ve been able to have regular progress visits and factory acceptance testing at Harsco’s workshop. Any issues can be resolved very quickly, and seeing the production in the workshop first-hand has also been a bonus.”

While the CRN and another project that Martinus is currently working on, the Forrestfield Airport Link are narrow gauge, the team are mindful that having dedicated narrow gauge plant and equipment will limit where it can work in Australia, New Zealand, and internationally.

“We operate an international rail business that works across three different gauges and probably about 20 different railway networks. Van Hoos and the in-house rollingstock engineers work closely to ensure that our build specification enable us to move the machinery around safely, quickly and efficiently,” said Baden.

In terms of the equipment that Martinus has purchased, which in addition to ballast wagons and the continuous track lifting machine also includes a sleeper laying machine, a track laying machine, four tampers and four ballast regulators, six flash butt welders among other pieces of plant, all are designed to be used across multiple projects.

“When purchasing plant, be it new or second-hand, we have been focused on gauge convertible plant which ensures the flexibility from one project to the next,” said Van Hoos.

Being able to move between standard and narrow also allows Martinus to work on shorter jobs on metropolitan networks.

This fleet is complimented with six locomotives that Martinus purchased from KiwiRail.

“It was perfect timing for Martinus that KiwiRail were renewing their current locomotive fleet. The gauge and specifications of the locos were aligned to our requirements for CRN” said Van Hoos. “These locomotives will be used for construction only to haul our ballast and sleeper wagons.”

While the fleet sets Martinus up for any number of projects around Australia and New Zealand, as the past year has shown, there are any number of unpredictable events that could occur in the meantime and require new thinking to ensure projects get over the line. In New Zealand, where Martinus has a contract to provide flash butt welding services to its Woburn depot and around the network. Of course, getting people there has not been possible so Van Hoos has come up with a unique fix.

“We’ve come up with a solution to train a local operator via video link under the supervision of our project team in New Zealand. One of our Australian based operator/fitters has been providing non- stop online training for carefully selected Martinus fitters and operators in New Zealand. This initiative has allowed us to continue on despite travel restrictions and resulted in minimal delays to KiwiRail’s re-railing projects.”

Martinus is ready to look at rail construction in a different way. Martinus is about to begin piling works for the first bridge on the Carmichael Rail Network.

Already, construction of the first of many waterway crossings has begun while bulk earthworks continue.

“We are delivering the port-side civil works, which is around 86 kilometres of the earthworks formation with 10 multi-span superstructures – one that spans 50 metres, 87 culvert structures and three-million cubic meters of cut to fill.”

The $340 million works program, announced in two separate contracts, covers rail laying to connect the Adani mine to the Central Queensland Coal Network, and the associated civil construction works.

To prepare the rail for installation, on-site flash-butt welding is taking place.

Martinus has 300 staff on site working on the project and is looking to involve locals wherever possible. 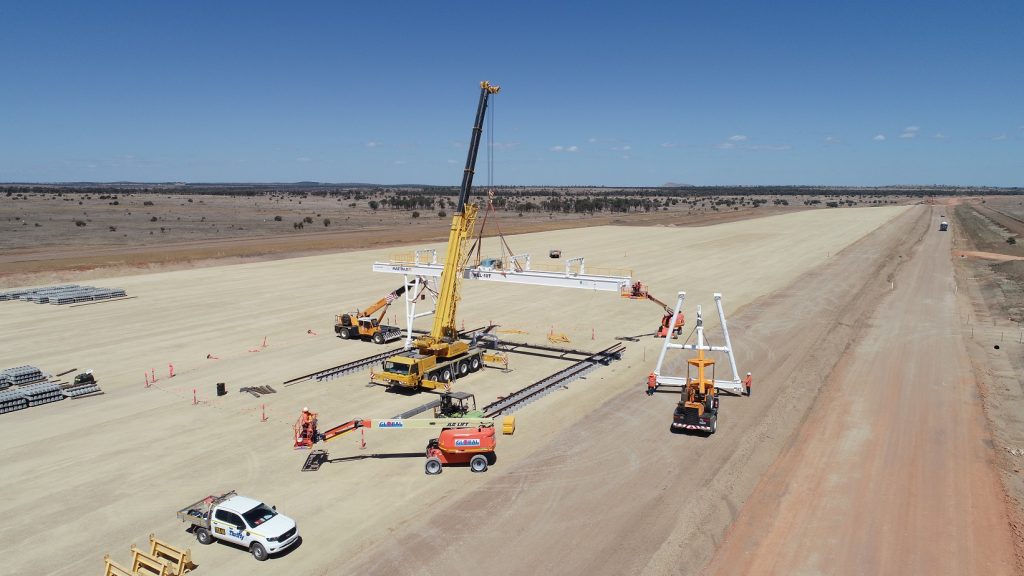 With an exclusive dedication to the rail industry, Martinus is bringing the approach of a family-owned business to major rail projects around Australia and New Zealand. END_OF_DOCUMENT_TOKEN_TO_BE_REPLACED